RSPH has reacted with disappointment to a self-regulatory proposal for labelling announced by the alcohol industry. The proposal, submitted by the representative European associations of the wine, spirits, beer and cider sectors to the European Commission, commits producers to do no more than provide nutritional information for their products online, with signposting on the label in the form of QR codes or web URLs.

Nutritional information – primarily in the form of calories – is a key component of RSPH’s proposal for better alcohol labelling to help moderate consumption and harm, as set out in its Labelling the Point report in January. The report confirmed previous research demonstrating that providing information online is ineffective, with less than a quarter (23%) of people saying they ever look online for information about alcohol products before purchase.

The European Commission has previously stated that if it considers the industry’s self-regulatory proposal to be unsatisfactory, it will look at introducing mandatory regulation – and RSPH is now urging it to do so. With the UK’s exit from the EU looming, RSPH is also urging the UK Government to bring forward comprehensive proposals for better alcohol labelling, including calorie information, health warnings, and mandatory inclusion of the Chief Medical Officer’s low risk drinking guidelines.

Reacting to the proposal, Shirley Cramer CBE, Chief Executive, RSPH, said: “Having spoken with the public about alcohol labelling in our own research, we know that providing health and nutritional information online, however signposted, is simply not good enough. The truth is that the overwhelming majority of people will not follow a QR code on a label, especially if they are not already health-conscious or digitally literate. The alcohol industry knows this, which is why the proposal announced today amounts to nothing more than hiding, not providing, information to consumers.

“Knowing what is in your drink is a basic consumer right, which the alcohol industry is consistently failing to fulfil. What’s more, providing that information gives drinkers the ability to make their own informed decisions about consumption, and has the potential to make an important contribution to reducing alcohol-related health harm. The European Commission must recognise that the industry’s own proposals on this front are wholly inadequate, and move to regulate – and even if it does not, the UK Government could take up the baton as we move towards our withdrawal from the EU.” 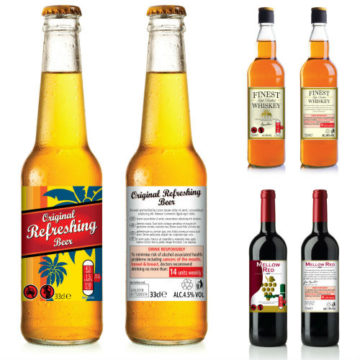 Labelling the Point: find out more about the report and the recommendations