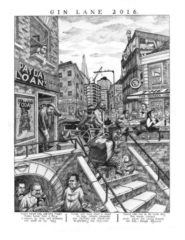 The new artwork, which reflects some of the biggest public health challenges now facing British society, was unveiled at RSPH’s Annual General Meeting on Wednesday 19 October 2016.

After huge media and public interest in the piece we have decided to sell limited edition A1 prints.