RSPH originally wrote this position paper exploring how activity equivalent labelling could be used as a novel method to address obesity when there was a greater emphasis within public health on individual behaviour change. Since that paper was published, as an organisation we have shifted our focus away from individuals and towards the environments we live in and how these determine our health and wellbeing. In the case of obesity, we now talk about the environment being flooded with unhealthy options, and how this makes it difficult to live healthily.

Activity equivalent labelling is something we have wanted to move away from, not just because it places responsibility on the individual, but also because we are very aware of the negative consequences it could have on some people. Although this type of labelling might make people think twice about what they’re eating, we would never want this to have a detrimental effect on those with eating disorders or mental health problems. However, research shows that on a population level activity equivalent labelling could be one effective initiative to reduce obesity, and therefore we have not revoked the paper.

Mental health is just as important as physical health, and although activity equivalent labelling may have a positive impact on people living with overweight and obesity, in our view it is not worth pursuing if it has a negative consequence on people’s mental health. We need food to survive and this type of labelling could complicate many people’s relationship with eating.

For those wishing to pursue this type of labelling further, we emphasise the need for caution. Measures should remain sensitive to any potential negative impact they may have on vulnerable individuals, including those suffering from or at risk of eating disorders.

RSPH will not be doing any further work on activity equivalent labelling, and instead will focus on our work to improve the physical and mental health of everyone.

Nuffield Health supports RSPH’s call for the introduction of ‘activity equivalent’ calorie labelling on food and drink. This is an easy way of illustrating calories using a more meaningful approach and will help the public understand how much activity is needed for even a small calorie burn.

Nuffield Health have a clear charitable objective to help people get healthy and stay healthy and we think this plea for new labelling, alongside encouraging people to eat a balanced diet and do some form of physical activity each day, will help improve peoples’ general health and reduce their risk of developing future health problems. 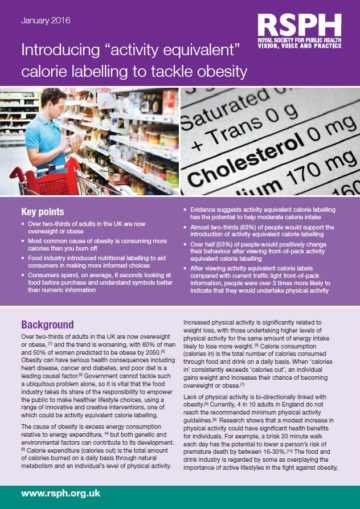 We have a number of policies regarding obesity, with recommendations aimed at improving the public's health