A new report, published by RSPH, the Youth Health Movement and Slimming World, is calling for a ban on fast food takeaway deliveries to schools and the introduction of new initiatives such as film-style classifications on unhealthy food and a loyalty card to reward healthy food choices

A new report, published by RSPH, the Youth Health Movement and Slimming World, is calling for a ban on fast food takeaway deliveries to schools and the introduction of new initiatives such as film-style classifications on unhealthy food and a loyalty card to reward healthy food choices, as part of a raft of ideas put forward by young people to tackle the childhood obesity epidemic.

Nearly one in five 10-11 year olds (19.1%) are obese, and the Government’s childhood obesity strategy has been promised this summer. However, this is the first time that young people have been asked for their views on the issue.

The move to ban deliveries to school is backed by three quarters of UK parents. In the report, young people point the finger at the temptation of fast food takeaways and unclear food labelling for the childhood obesity epidemic. Key findings from the research, which was developed from a roundtable workshop involving 19 young people aged 13-18 and a follow-up survey of more than 500 children, include:

In the report, the young people identify a number of steps which could be taken by food manufacturers, retailers, Government and others to help tackle childhood obesity. Their recommendations include:

Three quarters of parents (74%) surveyed by Populus also backed the suggestion that there should be restrictions on fast food shops serving children during school hours.

Shirley Cramer, Chief Executive, RSPH, said: “Our childhood obesity rates are disappointing, and tackling this must be a priority for government – there can be no excuses for fudging action on what is our number one public health challenge. While we welcome the Government’s introduction of a sugar levy on soft drinks, it is absolutely critical that the forthcoming childhood obesity strategy builds on this positive step with a basket of hard-hitting measures, from greater controls on advertising and marketing of junk food to food reformulation. This report gives a uniquely young person’s perspective on what steps can and should be taken, and while there is no silver bullet, young people are very clear what they think the causes of obesity are, and what action they would like to see from government and industry in particular.”

Thomas Munnelly, aged 16, who contributed to the report, used to struggle with his weight before he joined Slimming World’s Family Affair healthy lifestyle programme for 11-15-year olds with his mum and with the permission of his GP. Since losing 3st his life has changed dramatically. He said: “As a child who has struggled with my weight I know how difficult being overweight at a young age can be. I hated how I looked in pictures and finding clothes that looked good was really hard. It’s definitely easier for young people to make unhealthy choices rather than healthy ones – at my school we have several unhealthy takeaways within a few minutes’ walk, a shop round the corner selling sweets, crisps and fizzy drinks and kids selling unhealthy food out of their school bags at break times. I was lucky enough to find a programme that taught me about healthy eating and getting more active. Now I help my mum plan the food shop and do a lot of the cooking too. My life has changed massively and I can now look forward to a healthy future, but not all kids are as lucky. We’re the next generation, so if something isn’t done now then in a few years’ time, today’s children will pass their unhealthy habits on to their young families. If we tackle it now though, we can change things before it comes to that.”

Paul Sacher, child obesity expert and Slimming World advisor, said: “Childhood obesity is directly linked to many serious medical and psychological problems in children and adults such as diabetes, heart disease, cancer and mental health issues. It is so refreshing to hear the voices of children asking policy makers to support them by improving the obesogenic environment, if they are to have any chance of avoiding obesity and its consequences. Interestingly, many of the steps identified by the young people are steps that have been previously identified by experts but not acted on by the Government. Let's hope that many of these issues, important to young people, will be tackled in the upcoming childhood obesity strategy.” 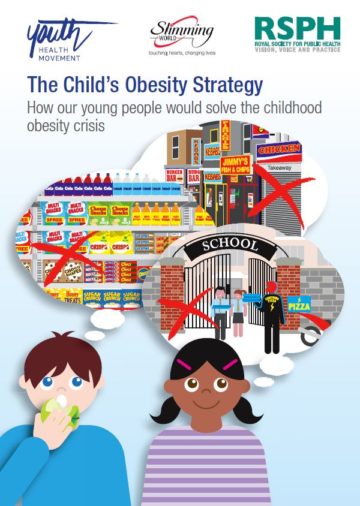 The rise of lip fillers and their risks

Guest blog: Catch-up vaccination for boys - The case for action