Should obesity be recognised as a disease?

RSPH are pleased to have supported a project by University of Nottingham Master in Public Health students, who investigated the issue of whether obesity should be recognised as a disease.

Obesity is an increasing problem in the UK, with current forecasts predicting that by 2050, approximately 50% of adults will be obese. It is important that action is taken to address the epidemic, not least because obesity can lead to chronic health issues including: Type 2 diabetes, coronary heart disease, cancer, stroke, and depression. Furthermore, existing obesity policy has shown mixed success in reducing obesity levels; Healthy Weight, Healthy Lives (2008), and Healthy Lives, Healthy People (2011) were both unsuccessful in reducing obesity among child and adult populations. Similarly, early results from the Childhood Obesity Plan: Chapter 1 (2016) shows that it may be on track for its targets for girls, but not for boys. This limited success highlights the need to look for alternative strategies to address obesity, and examining the evidence for disease recognition of obesity is therefore important.

In light of the growing prevalence of obesity in the UK, and the limited success of existing policies to mitigate it, it is worth exploring alternative strategies, such as disease recognition. This strategy could have the benefit of reducing stigma of people with obesity, challenging the notion of obesity being a ‘choice’, and increase public awareness that obesity is caused by a myriad of reasons. Indeed the World Health Organisation, United States, Canada, Japan, and Portugal have all previously recognised obesity as a disease, so it is pertinent to consider if similar action by the UK would be effective, and in the public’s interest.

1. The causes of obesity are misunderstood by the public

Public polling showed that 50% of respondents agreed that societal factors made it challenging for individuals to maintain a healthy weight and lifestyle. Respondents also identified factors perceived to be within an individual’s control as the greatest cause of obesity. This emphasises that there is a lack of awareness among the public regarding how wider social determinants can influence diet and physical activity, and they are not solely controlled by the individual.

2. The public view disease recognition as an ineffective strategy

Research on the public perception of different strategies to tackle obesity shows that the public views disease recognition as one of the least effective strategies. The strategy perceived to be most effective was education, followed by altering food affordability, and food advertising changes.

Professional opinion on the value of disease recognition presents a mixed picture, with four experts in support, two against, and two unable to answer. Support for the strategy was centred on topics including: empowerment, removal of barriers and inequalities to treatment access, and enabling easier discussion of obesity. Meanwhile, in opposition, key topics included: individual blame, significant changes to the healthcare system to accommodate, the multiplicity of obesities, and the need to also acknowledge too low weight as a disease if high weight is regarded as such.

RSPH supports the findings of the report, that the evidence base for recognising obesity as a disease is not currently strong enough, and that it is inconclusive whether it would help improve access to prevention strategies and weight management services, or help combat stigma and discrimination. Additionally, while RSPH supports actions that raise the profile and public awareness of obesity, it believes that framing obesity as a disease would serve as a distraction from ongoing work on the diseases that are caused by obesity. Priorities for action should remain on: tackling obesogenic environments, seeking improvements in treatment availability, and taking a holistic approach on obesity. It is worth recognising however that Covid-19 has transformed the public health landscape and opened the door for more ambitious policies to tackle obesity. Strategies such as disease recognition should not be ruled out in this new and changing landscape. 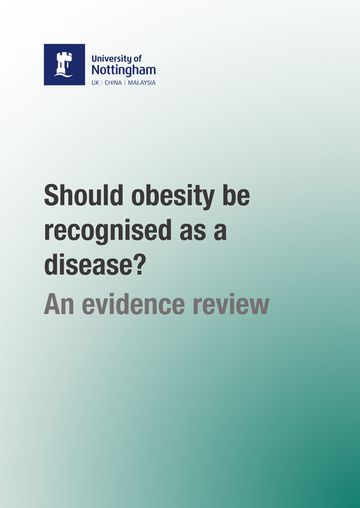