As the world’s longest established public health body, RSPH celebrates its 160th anniversary this year. To commemorate this milestone, it commissioned talented up-and-coming artist Thomas Moore to reimagine William Hogarth’s infamous 1751 cartoon Gin Lane – which depicts the debilitating effects of the gin crisis then sweeping London – for the 21st century.

The new artwork, which reflects some of the biggest public health challenges now facing British society, was unveiled at RSPH’s Annual General Meeting on Wednesday 19 October 2016.

The overall scene is the same street as presented in the original Gin Lane, but has been developed and modernised so that it is representative of a typical street scene in London, or indeed anywhere in the UK today.

Artist Thomas Moore said: “When I contacted the RSPH for this commission, I told them that, as an avid Hogarth fan with an interest in public health, I was the man for the job. After being commissioned for the piece, I can honestly say that I've given it everything. Hogarth was the grandfather of the cartoon, so I treated this project with the respect it rightly deserved. Recreating Gin Lane over the past few months has completely consumed me. Hogarth – I hope you approve.” 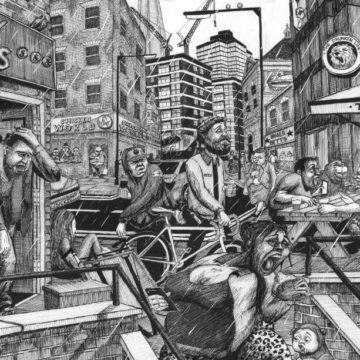