Dr Lisa Ackerley, chartered Environmental Health Practitioner also known as The Hygiene Doctor, outlines the importance of reducing the spread of Salmonella in the home and workplace 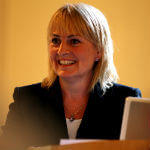 Dr Lisa Ackerley, chartered Environmental Health Practitioner also known as The Hygiene Doctor, outlines the importance of reducing the spread of Salmonella in the home and workplace.

Salmonella are common bacteria that cause food poisoning. The World Health Organisation (WHO) estimates 93.9 million cases of gastroenteritis due to Salmonella occur annually, and non-typhoidal salmonellosis (the disease caused by Salmonella infection) causes 155,000 deaths each year worldwide.

Salmonella are found in raw meats, raw poultry, raw soiled vegetables, unpasteurised milk and in the guts of birds and mammals (including people). Although symptoms from Salmonella infection are generally short-lived, longer-term health implications, such as reactive arthritis and meningitis, can develop.

Salmonella prevalence in the UK has fluctuated significantly over the last 30 years. The British Lion Code of Practice was introduced in 1998 and ensures safe eggs from the farm through production and to the retailer. It is the UK's most successful food safety scheme, with 90% of all eggs in the UK produced under the scheme.

The success of the Code of Practice has resulted in eradication of Salmonella in British Lion eggs, and subsequent changes to the Food Standards Agency’s official advice to the public regarding egg safety, confirming that "British Lion eggs are safe enough for even vulnerable groups to consume when raw or runny".

Despite this, cases of Salmonella infection still occur across the UK. In 2018, Public Health England (PHE) saw a rise in cases of patients infected with Salmonella typhimurium linked to lamb and mutton. A total of 283 cases were reported up until October 2018.

It is vital for us to understand how bacteria such as Salmonella spread and how to avoid infection within the home and workplace. Prevention requires control measures at all stages of the food chain, from agricultural production, to processing, manufacturing and preparation of foods in both commercial establishments and at home.

Tips for reducing the spread of Salmonella at home and in the workplace:

Dr Lisa Ackerley collaborated with RSPH to build an e-learning programme, Salmonella: facts and prevention strategies, which explores symptoms and long-term health effects as well as examining the means to control this disease.

RSPH now offers a growing range of  Online Courses . Some can lead to a formal Qualification , while others can contribute towards your CPD . All our courses will help you gain useful skills and knowledge and act as a foundation for further …

Working from home could trigger the next global health crisis

Our MECC for mental health journey