On the 8 December 2021, Chris Philp, Minister for Tech and the Digital Economy announced that ‘The government considers gambling-related harm to be a health issue and a public health issue, and preventing harm is an essential objective of our gambling regulation'. This marked potentially the first time a UK government has publicly recognised gambling as a public health issue, and was an encouraging sign that the Gambling Act Review would take a bold approach to reform.

However, despite these promising words, in the months since we have seen repeated delays to the white paper, amid rumours that the government is backtracking on proposals for a statutory levy and sponsorship restrictions. This makes it less likely that when it does finally arrive, the white paper will actually deliver on the public health promises set out by the Minister. Instead. we fear that it will bear a narrow focus solely on ‘problem gamblers’ rather than population-level measures which we know will have maximum impact across society.

At this uncertain moment for gambling reform, this article revisits the importance of taking a public health approach, in particular through recognising the similarities and relationships between gambling and other potentially-harmful commodities, namely tobacco, alcohol, and junk food, where a public health approach has been shown to be effective in reducing harms. We identify the types of public health policies that have been successfully implemented, and draw evidence-based lessons that can be applied to gambling reforms. 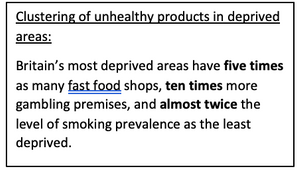 It is established that gambling activity clusters geographically with the consumption of other harmful commodities such as alcohol, fast food, and tobacco outlets, and that this is especially the case in the most deprived areas. Similarly, Public Health England found that substance use (including alcohol and tobacco) was a risk factor for subsequent harmful gambling among children and young people, and that regular gamblers were at least twice as likely to smoke cigarettes daily and consume alcohol weekly.

There is also increasing evidence of the existence of a cross-industry ‘playbook’ employed by unhealthy commodity industries including alcohol, food, soda and gambling, so understanding the types of policies in other domains that have circumvented this playbook can be a useful way for considering what may also work for gambling.

Lessons from other harmful commodities 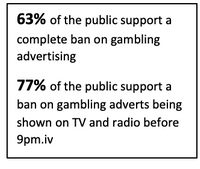 For tobacco, almost all forms of advertising have been banned in the UK. The Tobacco Advertising and Promotions Act 2002 banned all cross-border, billboard, sponsorship advertising.  We now also have a ban at point of sale and standardised packaging. Similarly, for junk food (foods high in fat, sugar and salt), we have seen advertising banned during children’s TV programmes, non-broadcast children’s media (e.g. youtube), and an advertising ban on Transport for London services.

Mass marketing to encourage smokers to quit and tobacco package health warnings have proven to be a success in the UK and globally, with hard hitting health-harm messages having the biggest impact on behaviour. Similarly for food, packaging displays traffic light labelling to inform consumers about healthy levels of consumption, and most recently, calorie labelling on out-of-home meals has been introduced. Providing increased information to consumers also has the added potential benefit of incentivising companies to produce healthier products or reformulate, such as lower calorie alternatives in response to greater consumer awareness.

There are clear benefits of making gambling consistent with other addictive and harmful products, through inclusion of identifiable health warnings, and removal of wording such as ‘fun’ from marketing that presents gambling as a leisure activity. The inclusion of warnings on gambling products would ensure consumers are able to make more informed decisions, and are aware of risks involved.

The NHS Long Term Plan ensures that people who are dependent on alcohol and smoking receive the support they need. One example of this is Alcohol Care Teams being introduced in hospitals with the highest alcohol-related admission numbers, and an NHS commitment to offer help to quit for every smoker admitted to hospital. The plan also provides targeted support and access to weight management services in primary care for people with type 2 diabetes or hypertension, including a doubling of enrolment in the NHS Diabetes Prevention Programme from 2019-2024.

One funding route for treatment services is through the introduction of a statutory levy, via the ‘polluter pays’ principle. We have seen the successful implementation of levies on other harmful products, such as the Soft Drinks Industry Levy, which in 2019/20 raised £336 million in revenue and removed 45,000 tonnes of sugar per year from our diets. Similarly, the recent Khan review recommends a ‘polluter pays’ levy to fund £125 million per year for a comprehensive smokefree 2030 programme. 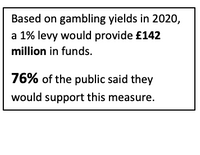 Gambling treatment services such as the National Gambling Treatment Service and NHS National Problem Gambling Clinic offer vital support for those people with high levels of addiction. Ensuring these services receive long-term funding, and are accessible country-wide is crucial. Long-term funding could come from a smart statutory levy on gambling products, whether set at a fixed 1%, or variable based on costs of services.

Spending and price restrictions plays an important role in reducing harm. Minimum Unit Pricing in Wales and Scotland has been effective in leading to product reformulation, with some companies moving to smaller bottles with weaker alcohol content, especially of the cheapest strongest products favoured by heavier drinkers. Similarly, the 2010 Alcohol Act in Scotland banned multi-buy promotions, resulting in a reduction in total off-trade alcohol sales. For smoking, the use of a tax escalator has made it less affordable in recent years, and creating a minimum pack size has made tobacco less affordable to children and young people.

Restrictions on how much a consumer can spend at a time in online gambling would help limit losses incurred. There is precedent for this in brick-and-mortar gambling,  where the maximum Fixed Odds Betting Terminal (FOBT) stake was cut from £100 to £2, leading to gross gambling yield on these machines decreasing by 99% the following year. Applying a £2 stake limit to online slot gambling products should bring similar benefits, and there is strong public support for this approach.

In addition, as with alcohol and fast food, a ban on ‘special offers’, which in the case of gambling would take the form of banning free bets, would help prevent impulsive and excessive spending. This has been called for as part of ‘Luke’s Law’, which has sought to ban free bets and incentivising emails.

There are clear lessons to be learned and applied from other successful public health policies, and the government must act on its promises of treating gambling as a public health issue. Doing so will enable us to reduce harms at the population level and offer savings for the NHS and social care.

Finally, perhaps it is also time to take broader action, specifically for the Government to create a ‘Harmful Commodities Strategy’, that seeks to join up policymaking between products like alcohol, tobacco, junk food and gambling. Given the clear overlap between these commodities, both in terms of their prevalence, the harms they cause – especially amongst more deprived communities - and as risk factors for consumption of others, it makes sense to move beyond treating these individually.

Blog: Using the skills of Allied Health Professionals to support the Work and Health Agenda