The Gambling Health Alliance is calling for loot boxes in video games to be classed as a form of gambling.

Loot boxes are features of video games that provide gamers with a randomised item in exchange for money. The items won can aid gameplay, but they aren’t always beneficial for the player.

Buying a loot box is like taking a gamble, but the law doesn’t see it that way. Children and young people are being normalised to gamble in video games, and we think better protection is needed to prevent young people from engaging with this gambling-like activity that is damaging health and wellbeing.

Do you think the gambling nature of loot boxes is polluting gaming? Have you caught yourself or someone you know chasing a win in video games?

What do you think of loot boxes in video games?

What are loot boxes?

Loot boxes are virtual treasure chests inside video games, where the contents are randomly selected. That means when the player acquires the loot box, often by paying for it with ‘real-world’ money, they have no idea in advance whether it contains an item which they want (to improve or customise their experience of the game) or the odds of it doing so.

How popular are loot boxes?

Although not everyone may be familiar with the term loot boxes, they are an increasingly common feature in video games, appearing in over 70% of the most popular games on the gaming platform Steam and 60% of the top mobile games on Google Play and the Apple app store.

Much of this money is coming from the pockets of children and young adults, amongst whom games containing loot boxes are highly popular. In a 2019 survey by the UK Gambling Commission, nearly 1 in 4 (23%) 11-16 year olds said they have paid money to open loot boxes; a survey by Parent Zone found 40% of young people had done so.

But what’s the problem?

As you might imagine, the financial toll of loot boxes can be a heavy one, and there are many stories of children spending thousands of pounds chasing their losses. But there are also harms to their mental health and wellbeing inside loot boxes. When we surveyed young people about loot boxes, they described feelings of addiction and pressure to spend more on loot boxes so they can win items to impress their friends.

The NHS Chief Mental Health Nurse has described loot boxes as “setting kids up for addiction” because of their similarities to other forms of gambling.

Loot boxes use a mechanism similar to the one in a slot machine: you pay money in the hope of getting a prized item, not knowing what the odds are of winning it, with chance deciding whether you do or not. Inside, there may be an item which helps you progress within the game or enhances your character’s appearance, but equally it might be something that is of no value. Plus, you have no way of knowing how much you would have to spend in total to get the item which you really want.

Sounds like gambling to me, so why aren’t they illegal for children?

If you think loot boxes sound like gambling, you’re not alone. Other countries, like Belgium and The Netherlands have come to the same conclusion about paid-for loot boxes. In the UK, the House of Lords Gambling Committee has also called for loot boxes to be brought under the Gambling Act, which would make them illegal for under-18s to buy. The Children’s Commissioner, Anne Longfield, has also recommended that loot boxes be classified as gambling. Nearly three in five (58%) of the 1,100 young people we surveyed also thought loot boxes counted as gambling.

The reason loot boxes aren’t already regulated is because the items inside loot boxes are not designated as “money or money’s worth”. But, that said, there are plenty of third-party sites where the prizes can be bought and sold, or gambled for money (known as skin betting).

So what can we do about it?

The Gambling Health Alliance is campaigning for:

You can help us protect gamers’ wellbeing by:

You can find out more on our Support #LidOnLoots page

In my opinion loot boxes are gambling. They take away from the experience of the game. They are manipulative, predatory, and no better than drugs. The fact that they are still classed as legal and appear in games rated for kids is disgusting. I truly believe that games developers and publishers like EA will not change – Government action is needed.

Show your support for our #LidOnLoots campaign: Share the campaign across social Get in touch with the Department for Digital, Culture, Media and Sport to demand they take action Sign up to receive campaign updates

Skins in the Game

RSPH have published a report revealing young people consider gambling to be an increasingly normal part of their lives.

We asked gamers aged 13 to 24 in which games do loot boxes have an overall negative impact on the gaming experience. The worst games were: 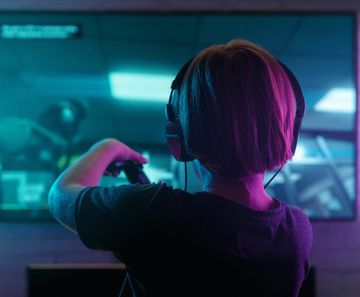 What is the financial impact of loot boxes?’ Read our short paper to find out

view buying a loot box as a form of gambling

should be illegal for under 18s to buy

is bad for their health

“The increased prevalence of loot boxes within games aimed at younger audiences is a huge concern. It’s shocking that games which contain loot boxes and therefore an element of gambling at a financial cost are not required to disclose this on either packaging or websites. Loot boxes normalise gambling, yet remain largely unregulated, and easily accessible to children, increasing their likelihood to gamble later in life with a reduced awareness of the potential dangers. This needs to be addressed urgently in order to prevent widespread harm amongst a generation of young people.

“As Chair and Vice Chair of the Gambling Related Harm All Party Parliamentary Group, we welcome the Gambling Health Alliance’s ‘Lid on Loots’ campaign and their call for Loot Boxes to be limited to games aimed at over 18s only. We look forward to continuing to work closely together to ensure we protect children from the dangers of gambling. The gaming industry should not be a vehicle to groom young adults for the gambling industry to exploit later in life.”

"Loot boxes for me are quite possibly, the worst thing to happen to gaming. They have a negative effect on gamers, especially young people. Many parents buy their children games, they see the PEGI 3 age rating for games like FIFA and think this will be a suitable game for their child, which isn't always the case. When I was young, I played a lot of FIFA and I always wanted the best players for my team. It started becoming a problem when my friends would get a good player and I wanted to get the same cards or better, so I would go home and spend all of my pocket money on 'FIFA points'.

"Only in the past few years have I realised how much I was wasting my real money on a fictional currency that would realistically only last a year until the next game came out. This is a serious issue – it is underage gambling and I don't see how you could describe it any other way."

Between 29th October and 16th November 2020, data was collected from 611 respondents aged 13 to 24 living in England, Scotland and Wales. The survey sought to understand loot box purchasing habits, and the impact of loot boxes on health and wellbeing. It was conducted through Survey Monkey and promoted through social media, Reddit, and email marketing to previous RSPH survey respondents.