A new report published by RSPH and Public Health England, has identified a number of opportunities and challenges for community pharmacy teams to further support the public’s health

A new report published by RSPH and Public Health England, has identified a number of opportunities and challenges for community pharmacy teams to further support the public’s health.

The report, based on research conducted in early 2016, provides a snapshot of the extent to which pharmacy teams are supporting the public’s health, the opportunities and challenges they may face and what can be done to address the challenges.

With around 11,647 pharmacies nationally, including 2,100 Healthy Living Pharmacies (HLPs), community pharmacy has an important role to play in championing the public’s health. Receiving approximately 1.2 million health-related visits every day, public trust in the health advice of pharmacists and their teams is on a par with that of nurses, opticians, and dentists.

The key challenges identified by pharmacy teams include:

However, the report also highlights a number of recommendations aimed at increasing collaboration and the profile of pharmacy, particularly around the commissioning process. These include:

Kevin Fenton, Public Health England’s National Director for Health and Wellbeing, said: “We welcome this report which highlights how community pharmacists are continuing to play a vital role in supporting the public in looking after their health. By offering a range of services, such as an NHS Health Check, helping people to stop smoking and sexual health advice, they’re improving the health of some of our most deprived communities.”

Shirley Cramer, Chief Executive of RSPH said: “With a workforce of around 60,000 and a community pharmacy located on most of our local high streets, this is an instrumental part of our wider public health workforce. While it is encouraging that pharmacy teams have a clear appetite to support the public’s health, it is of concern that challenges exist, particularly within the commissioning landscape. It is in the interests of the public’s health that pharmacy’s role and contribution is recognised by all parts of the local health system and we’d support initiatives aimed at increasing collaboration, particular with GPs and giving greater prominence to pharmacy on local Health and Wellbeing Boards. Continued action is also required to persuade the public that their local community pharmacy is the default first port of call for many lifestyle health services, so that we can reduce pressure on GP or local hospital services, particularly ahead of anticipated winter pressures on the NHS.”

Jonathan McShane, Chair of the Pharmacy and Public Health Forum said: “It's time to stop talking about the potential of community pharmacy in relation to public health and start seizing the opportunities. This report sets out not just what more pharmacy can do but also the barriers that currently prevent us from making the most of the community pharmacy network consistently across the country. The report challenges all parts of the system to work better together to make a really positive impact on the public's health.” 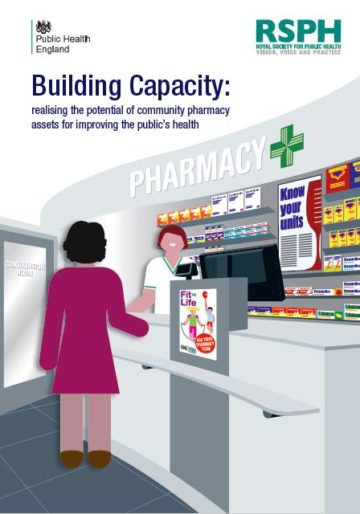