Quitting smoking is most difficult New Year’s resolution to keep

As 2016 draws to a close, many Brits will be making New Year’s resolutions for a healthier 2017 and figures released by RSPH reveal that quitting smoking is by some margin the most difficult resolution to keep

As 2016 draws to a close, many Brits will be making New Year’s resolutions for a healthier 2017. Figures released by RSPH rank some of the most popular health-related resolutions from most to least successful after one year, and reveal that quitting smoking is the most difficult resolution to keep by some margin.

Of those who resolved to stub out the cigarettes this time last year, 3 in 5 had started smoking again by 31 January and as few as 13% were still smoke-free one year later. The most successful resolution made was to improve relationships with friends and family, with 3 in 5 still keeping to this after a year.

Around a third of the UK’s 10 million smokers make at least one attempt to quit every year, often driven by key life events or milestones such as New Year. National figures show only 4% of those who attempt to quit smoking unaided remain smoke free one year later, but smokers can increase their chances of success four-fold by using stop smoking services, which are often most effective when combined with Nicotine Replacement Therapy (NRT).

E-cigarettes are becoming increasingly popular, and RSPH recognises the growing body of evidence that for many they can be an effective smoking cessation tool.

Shirley Cramer CBE, Chief Executive, RSPH, said: “For many seeking a healthier 2017, a New Year’s resolution can be a great way to draw a line in the sand, get motivated and stay motivated – whether to kick an unhealthy habit or take up a positive new activity.

“Smoking is the number one cause of preventable death in the UK, so it is encouraging that many people are choosing to try and quit as their resolution. Although quitting can be difficult, our research demonstrates that those who try to quit at New Year are more than three times more likely to succeed than the national average.

“Whatever the time of year, cutting down and quitting cigarettes is always beneficial, and it’s never too late to make a big difference to your health by doing so. It is vital that those trying to do so have access to the best support possible, and that smoking cessation services do not fall victim to funding cuts.” 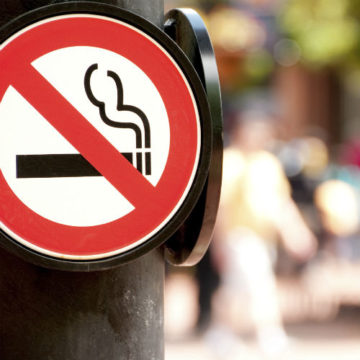 Find out more about our work on promoting smokefree communities