In 2007, smoking in enclosed public spaces in the UK was banned. This landmark step has reduced smoking-related harm, but we can and must go further to help the UK kick the habit for good.

Smokefree Communities aims to support existing smokers to quit and discourage new smokers from starting by further cutting down the space available for smoking in our public spaces – not just indoors, but outdoors too.

By working closely with local authorities, we aim to empower communities to prohibit smoking in their outdoor spaces, especially those frequented by children and young people, to reduce their exposure to smoking and make sure it is not seen as a normal part of everyday life.

We now live in a society where the harms of smoking tobacco cigarettes are almost universally acknowledged. In spite of this, around 10 million people in the UK still smoke, and it kills 100,000 of them every year, making it our leading cause of preventable illness and death.

Almost two thirds of smokers want to quit, but this is easier said than done. The introduction of the indoor smoking ban in 2007 was a big help, with a remarkable 400,000 people saying they were motivated to quit in the year following the ban.

However, smoking remains a highly visible part of life in outdoor spaces, from restaurant and pub gardens to parks and public squares. This is not only unhelpful and unsupportive for those who are trying to quit, but also sends a message to children and young people that smoking is a normal and desirable part of life.

Write to your MP 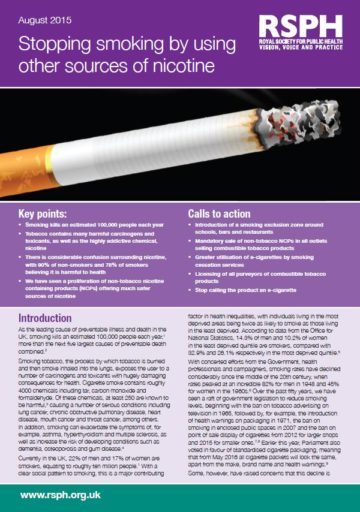 Download our position paper: Stopping smoking by using other sources of nicotine

people a year in the UK

If smoking tobacco was banned outside pubs and bars

of smokers would switch to e-cigarettes

What is RSPH calling for?

A number of outdoor smoking bans have already been introduced in the UK, including in public squares in Bristol, outdoor public events in Nottingham, and university campuses in Bradford and at the University of the West of England in Bristol.

To give existing smokers a viable alternative to help them quit, RSPH strongly recommends that e-cigarettes are exempt from any such bans.

“This is the kind of move which will reinforce the idea that you do not have to smoke. It's the sort of thing that changes the next generation.”

What can I do?

If you want to support the Smokefree Communities campaign, you can: